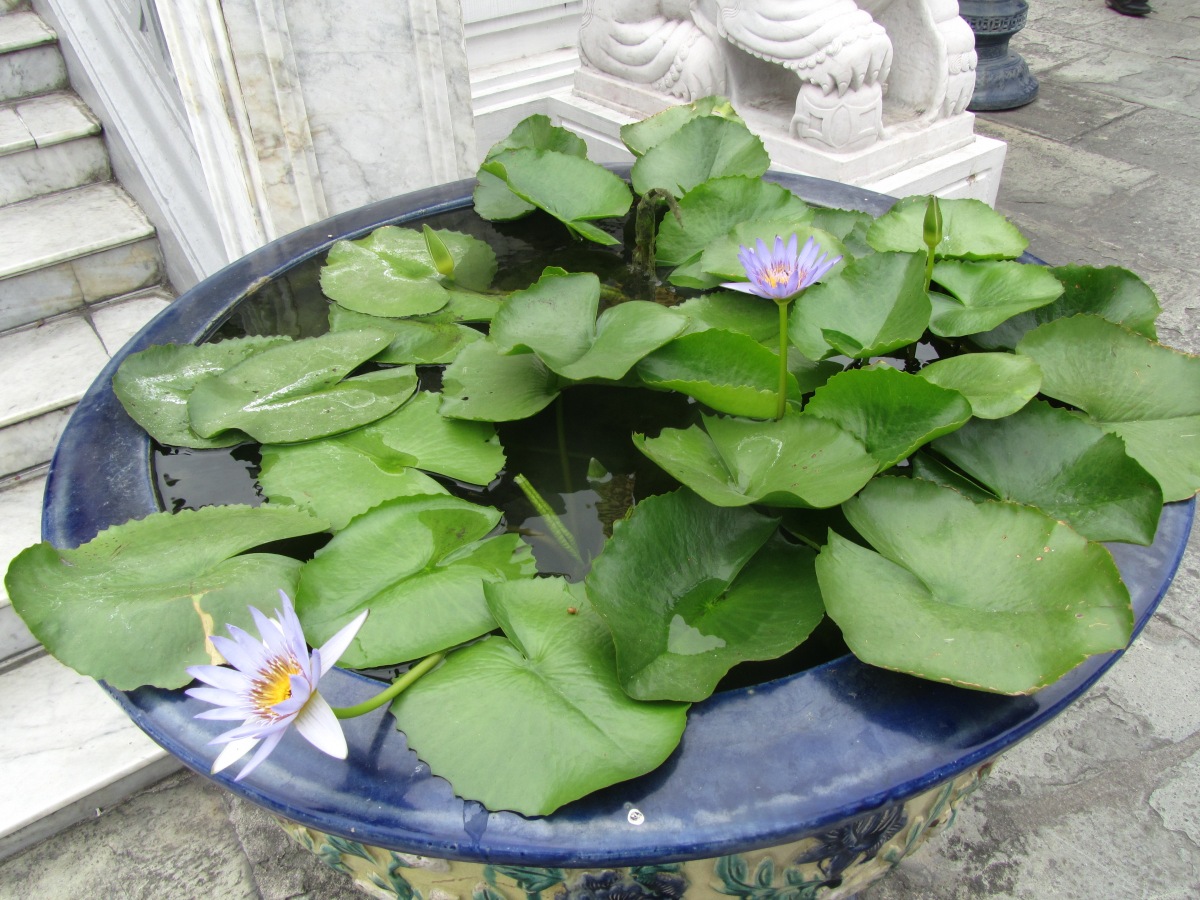 Before and after the trip to Wat Pah Nanachat, I spent two full days out and about in Bangkok. My hotel was convenient for getting to and from the airport, but not so much for to and from the main part of the city. That being said, it was easy to find my way around Bangkok by way of the metro system.

Like metros in other cities, Bangkok’s system has handy maps at the stations, and arrows all over to help you on your way. The cars are clean and the lines take you to most of the major tourist and other stops. Other than rush hour, it’s pretty uncrowded. During rush hour is every bit fitting of the image one can conjure of a crowded subway car. But in a humorous way, since the riders are able to go with the flow.

During one ride, I watched more and more people climb on. Those of us that were standing close smiled at each other, and although we didn’t speak, conversed with our eyes, saying “this is crazy, na?”. At each stop, it seemed like there was no way any more people could fit in the car. And then five more people squeezed in. Again at the next stop, and the next one. I never saw anyone stay behind at the station, saying “oh, forget it”.

As we piled out like lemmings, I made my way to the Grand Palace. Instead of one building, it’s a combination of more, and has been home to the successive kings there. It’s also the home to Wat Phra Kaew, where the emerald Buddha is kept. Sitting upon a giant dais, the emerald Buddha is actually made from Jade, and is 75cm high. No pictures are allowed inside the temple, but there is plenty to photograph outside. 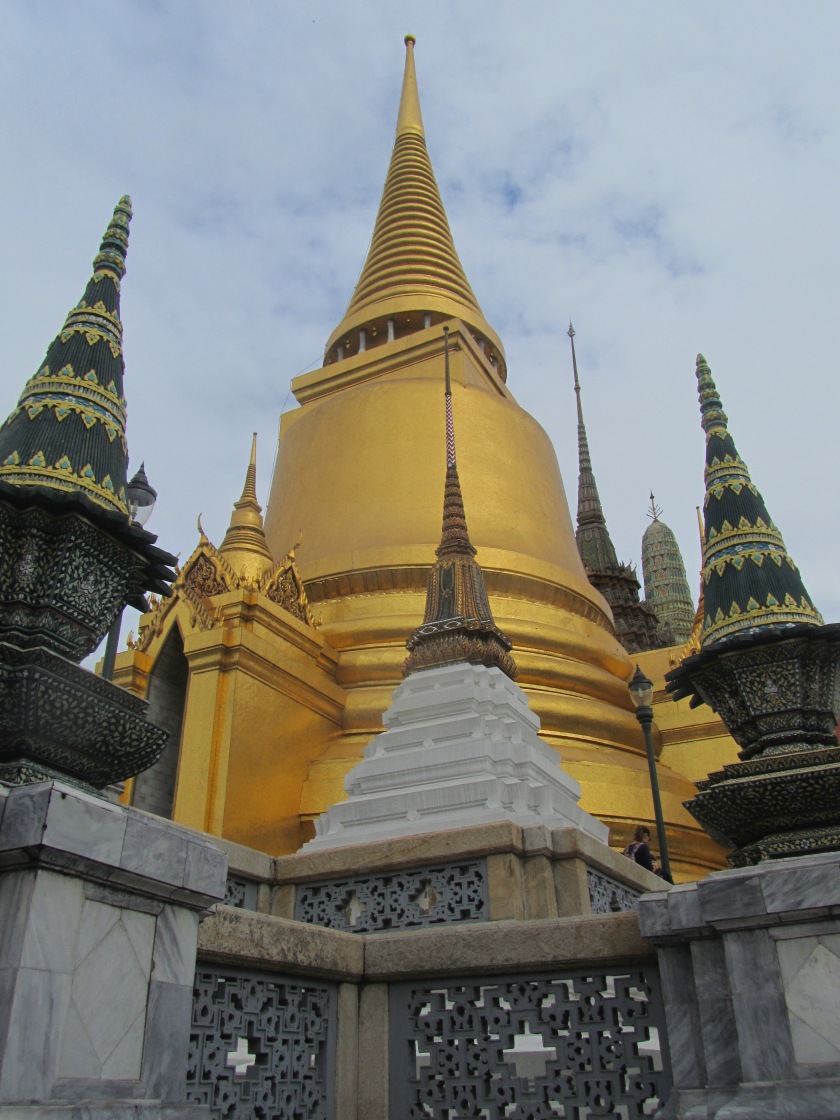 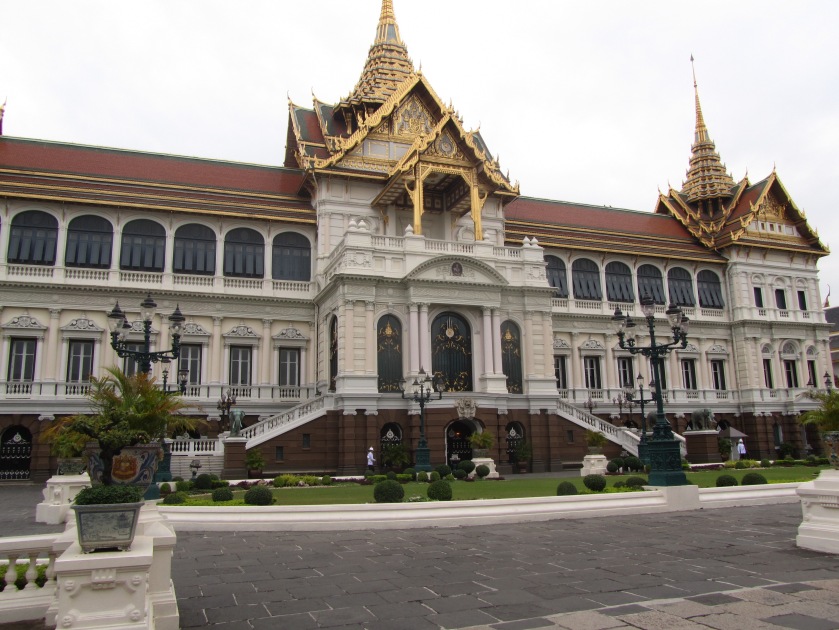 The highlight for me that day was Wat Pho, the home of the reclining Buddha. Perhaps it was the absence of crowds, but even though I enjoyed the palace, I enjoyed Wat Pho even more. It was a peaceful, beautiful place one could get lost in, filled with all the ornamental gold and building finery you could imagine. 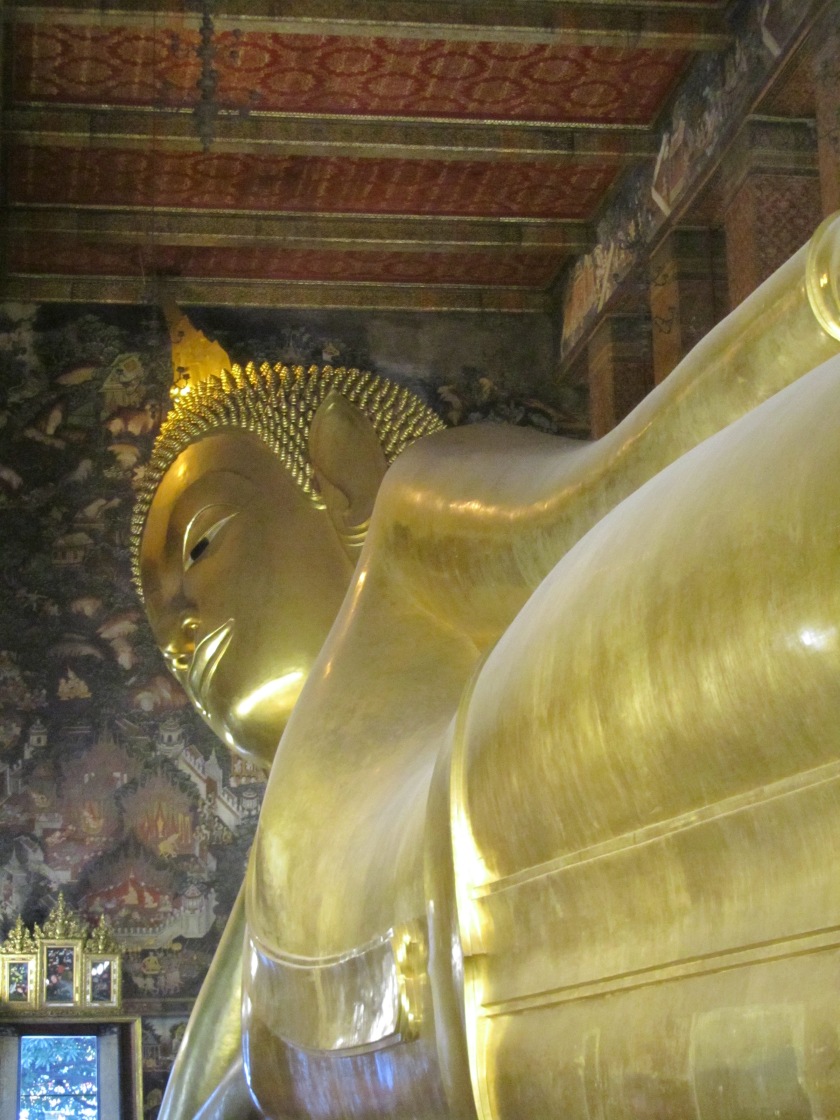 As evening drew near, I was on my way to the exit when I heard chanting. I went in the temple to discover about two dozen monks chanting parittas, aka blessing chants. I sat down and enjoyed the atmosphere for a while before twilight approached.

After I returned from Wat Pah Nanachat, I took the metro again to the river taxi, and rode along the river to the northern end of town for less than 20 Baht. There is a tourist boat that costs 150 Baht to hop on and off all day, or one can take a few individual trips. I went up and back, so it wasn’t worth paying for the tourist fee. 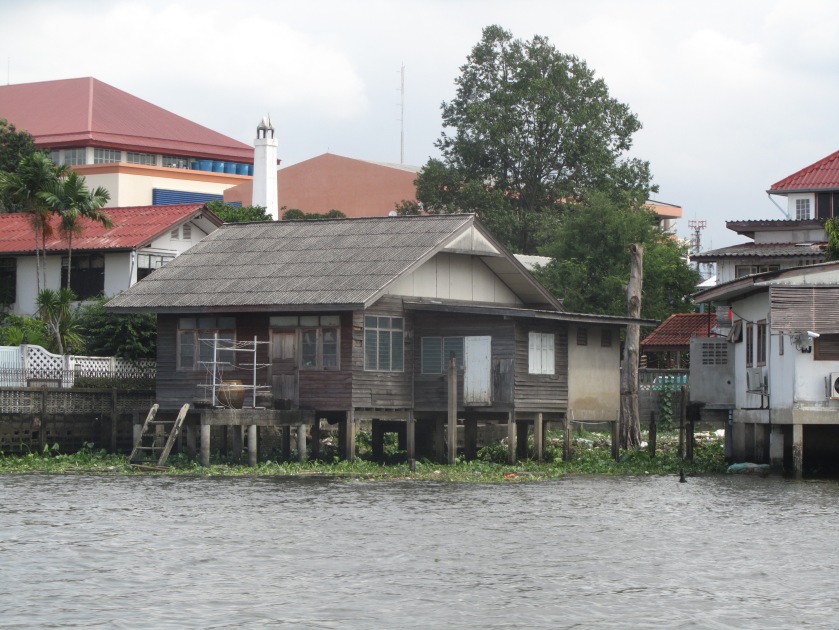 At the north end of town is an old fashioned market with all forms of food, clothing, and various trinkets. It wasn’t too crowded, and I really enjoyed wandering around, taking pictures of all the things for sale. 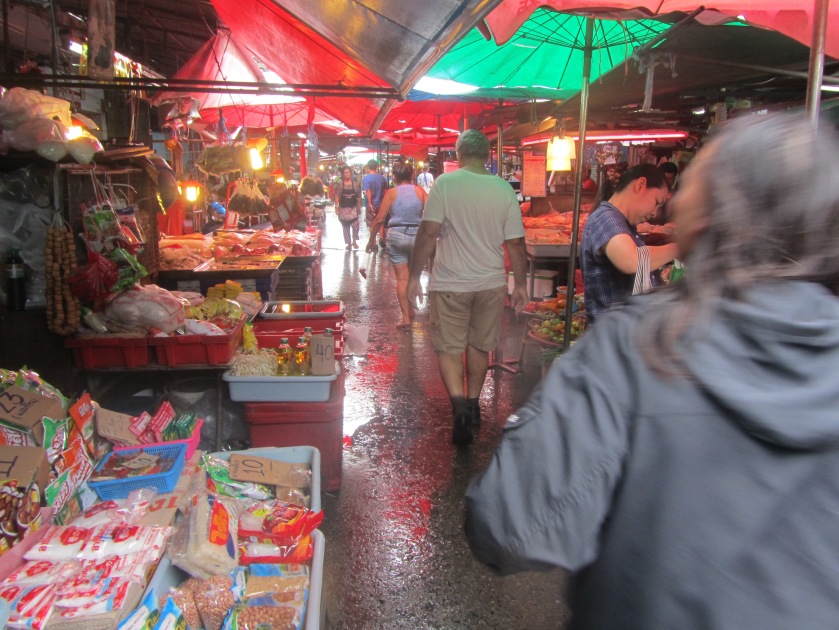 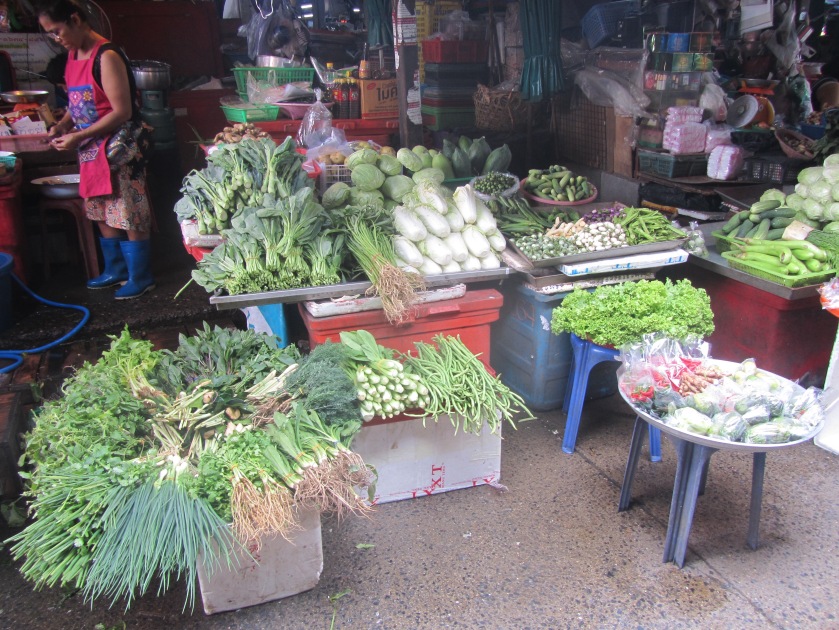 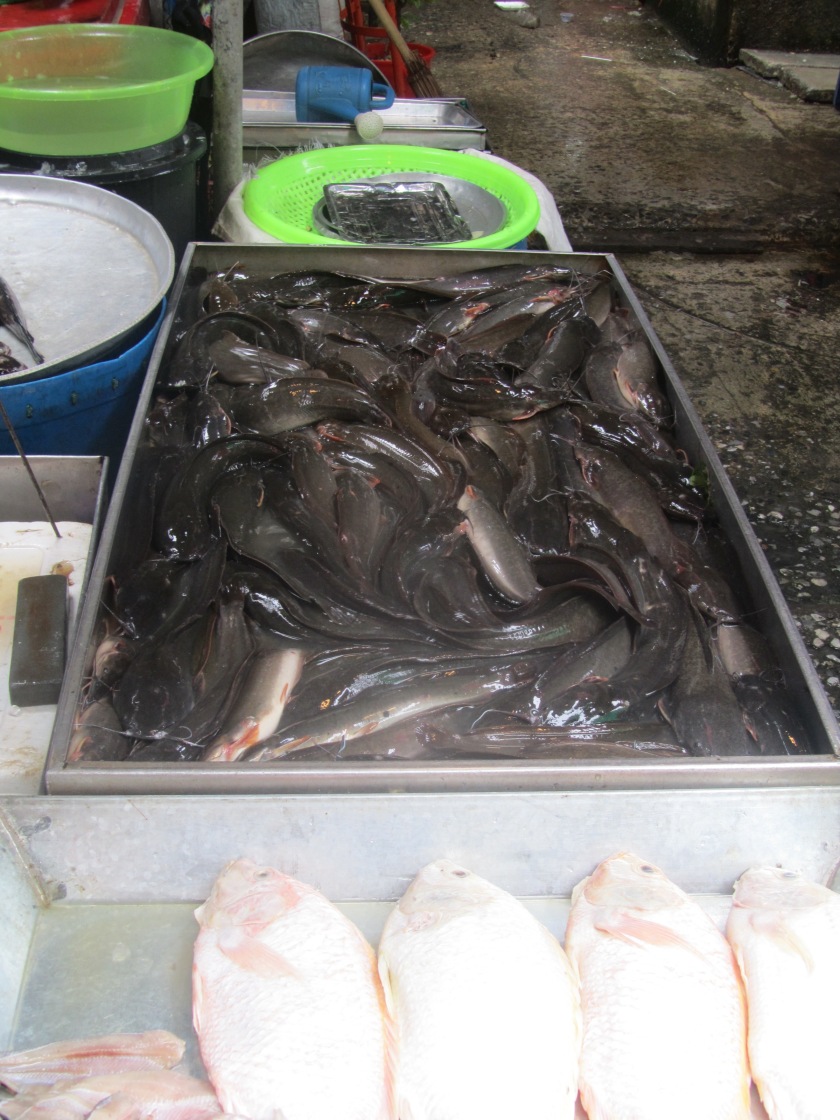 Looking for another similar market, I ended up in two rather upscale malls. While the malls were unique, I found the market experience much more agreeable.

The next day I relaxed at the hotel before going to the airport a bit early. Having waited all day in Indian train stations, waiting here was a breeze. Clean, quiet, and with lots of stores and restaurants, I had no difficulty just hanging out. Once I got through security and customs, I was amazed and even a bit overwhelmed with the number of shops available.

And thus began my 24hour trip to get home. I arrived two days ago, and am still a little jet lagged. But I must say it feels good to be back. I’ll be staying in rural Pennsylvania with my folks for a while, then staying at a monastery in Canada for a few months (yes, I’m going to freeze my….off). While I enjoyed this trip for the most part, it’s been a bit long. Traveling can be fun, but long haul travel is an excellent opportunity for seeing the value in putting down roots.

And so I will trust in the universe to show me where to plant myself.

9 thoughts on “Out with a Bang”