Wat Pah Nanachat is a Buddhist monastery in northeastern Thailand that belongs to the Thai Forest Theravadan school of Buddhism. It was founded by Ajahn Chah (a renowned monk in that tradition) in the early 70’s as he had an increasing number of western students. At Wat Pah Nanachat the western monks could receive the same training given in other Thai Forest monasteries, but in English until they gained some proficiency in the Thai language. Many of the western monks in this tradition today started out at this monastery, and I wanted to spend some time there.

I had originally planned a longer visit, but travel fatigue and diminishing funds shortened the Thailand portion of the trip. Still, this was definitely the highlight of my time in Thailand, so I thought I’d share the experience, and in a slightly different way…
From Bangkok, you decide to take the scenic twelve hour train route to Ubon Ratchathani. To make things more interesting, you decide to go third class on a friend’s advice. So early in the morning you go to the train station (which lacks the grime and smell of urine that you’re used to at train stations), buy your ticket and find your seat by the window.

The train is pretty empty. There are rows of benches facing each other on both sides of the aisle, and fans overhead. The coach is fairly clean. A few people step aboard, hoist their luggage in the racks overhead, and begin speaking to each other and occasionally to you, in Thai. A melodic language of which you understand very little, if any. You find yourself wishing you had studied a little more Thai before you got here.The train takes off and you feel the wind on your face as you watch at first buildings, then rice paddies go by. It’s a moving picture that keeps you entertained in between trying to communicate with the friendly people who sit near you and trying to identify the food that the numerous vendors bring by. 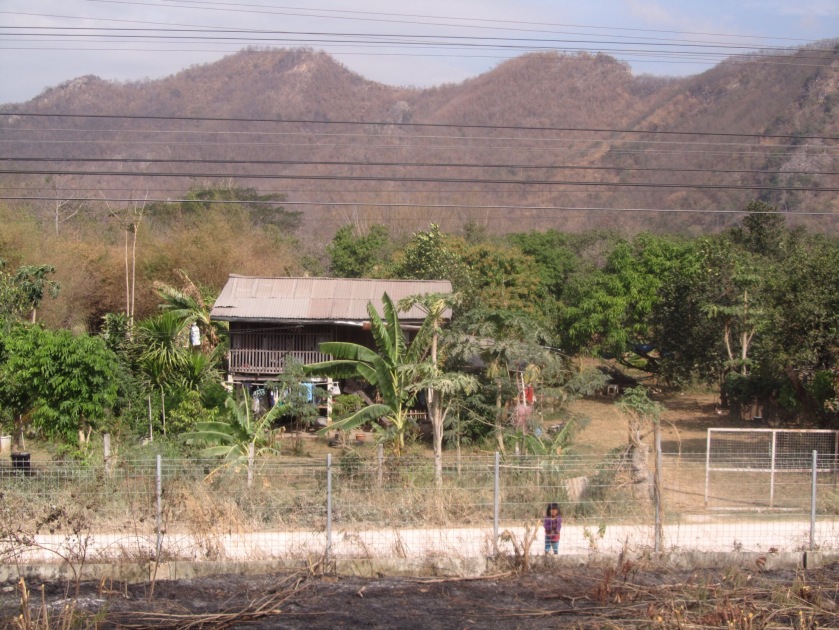 You see little packages wrapped in banana leaves and know from experience that sticky rice is usually inside. You summon up the courage to by some for a minimal price and proceed to open a small breakfast of sticky rice with sweet beans inside. 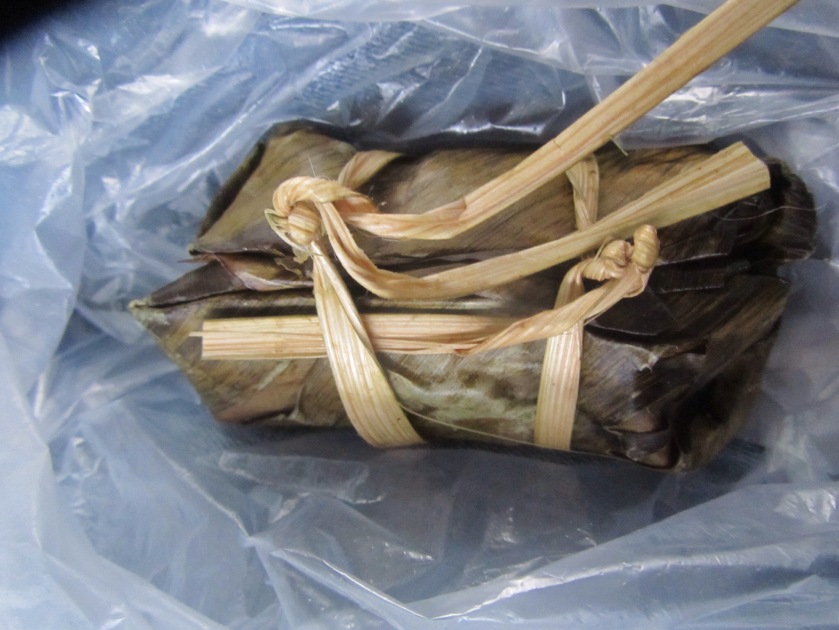 You’re not disappointed. A bit later you decide to try another dish. While you prefer vegetarian food, the only options seem to be meat. Half chickens on a stick. Fish on a stick. Pieces of pork on a stick. You go for the latter and hope for the best. Later, of course, they bring the vegetables – slices of something between a cucumber and a squash with sweet chili powder. You eat all this along with a Thai iced tea before noon and call it good.

The scenery and hours go by until you reach Ubon Ratchathani, and finally your hotel. Knowing you’ll have to be up before the crack of dawn for the next few days, you turn in early.
And wake up in the early morning running to the bathroom.

Your head is aching like your worst migraine, you feel hot, then cold, and spend the day throwing up. And wondering, was it the pork? You’ll never know, but you’re certainly not going to the monastery today. You’re thankful that you didn’t eat anything in the evening yesterday. It’s not until later that evening that you can tolerate sips of fluids, and the headache begins to subside.

The next morning is a new day, you’re feeling 90% better and you head to the monastery. Behind the gates of Wat Pah Nanachat is a forested area that feels like another world. You find the large, open sided meditation hall and sit down with a mat on the marble floor. 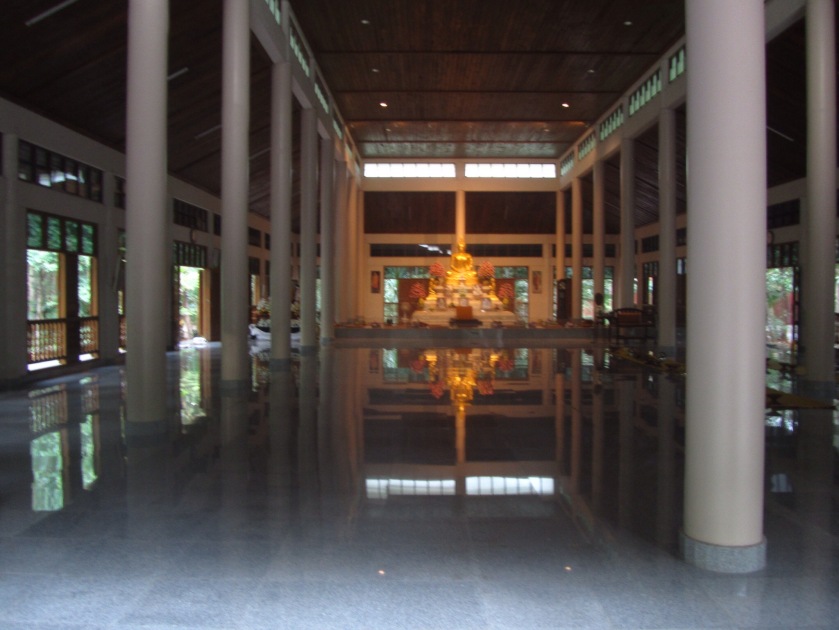 About two dozen monks arrive in ochre robes, sit down at the front of the hall, and chant a blessing. Then they go to the kitchen to receive food that has been prepared and offered to them. Like the monastics in the Buddha’s time, they rely completely on the lay community for food: whatever is offered is what they eat for that day. No calling Domino’s Pizza or running to 7-11 for snacks. The monastics are fed and given shelter, and the lay community benefits by receiving spiritual guidance and examples of ethical behavior. It’s a two way street that ties the two together. In addition, the monastics are required to finish their meal before noon. At Wat Pah Nanachat, the meal is offered at 8 am and finished well before 9.

When the monks have been served, you join the other guests in taking the meal. You then meet with the monk who arranges guest lodging. Visitors to the monastery are expected to abide by the eight precepts, and are asked to turn in electronic devices during their stay. Even though you use it often, you breathe a sigh of relief at cutting the internet cord for a while.
You’re taken to the women’s section where you’re assigned a meditation hut, called a kuti. You’re given a reed mat to sleep on, a blanket, and a pillow. You have your own sheets. There are no beds – it’s just the mat. You’re also given black skirts and grey tops that are the uniform of women visitors. Male visitors wear all white, and after a week’s time are required to shave their heads and eyebrows like the monks do.

There’s nothing scheduled until three in the afternoon, so you have time for personal practice. Even though it’s January, it’s still warm enough in the day that you struggle to stay awake. Finding a walking meditation path, you observe the sensations in your feet as they make contact with the air and earth. You can almost feel the presence of Ajahn Chah here, urging you to do so much walking meditation that you make a rut in your waking path.

At 3:00 you join the other visitors in sweeping leaves, and at 4:30 you have tea time. Mostly this entails drinking sugary beverages to get an energy boost for the rest of the day. You have just enough time to go back to your kuti area to take a cold shower before going to the meditation hall at 6:15.

The evening Puja, or meditation service, starts with chanting in English and Pali. If you’re interested, here’s a link to some recordings. The chanting is finished, and now it’s time to watch the breath, with varying levels of success. Your mileage may vary. But by the end of an hour, the mind usually settles down at least a little, and you peacefully return to your kuti to fall asleep.

What? Is that the alarm already? It can’t be!

Oh, but it is. 0300. Time to get ready for morning Puja at three thirty. Same routine of chanting and meditation, but the newness of the day brings another dimension. And once you get used to it, it’s not so bad. You can even do walking meditation at the back of the meditation hall to stay awake.

You spend an hour doing some cleaning, and then are released until seven to help with setting up the food line. And a new day begins…

After traveling around for so long, staying at WPN was a taste of coming home. I had an encouraging talk with Ajahn Siripañño at the end of my visit there and my stay was a peaceful conclusion for the journey.

I did spend a day wandering in Bangkok before and after the trip, which I’ll write about later, but Wat Pah Nanachat was both the draw and reward for coming to Thailand, so I wanted to share this first.