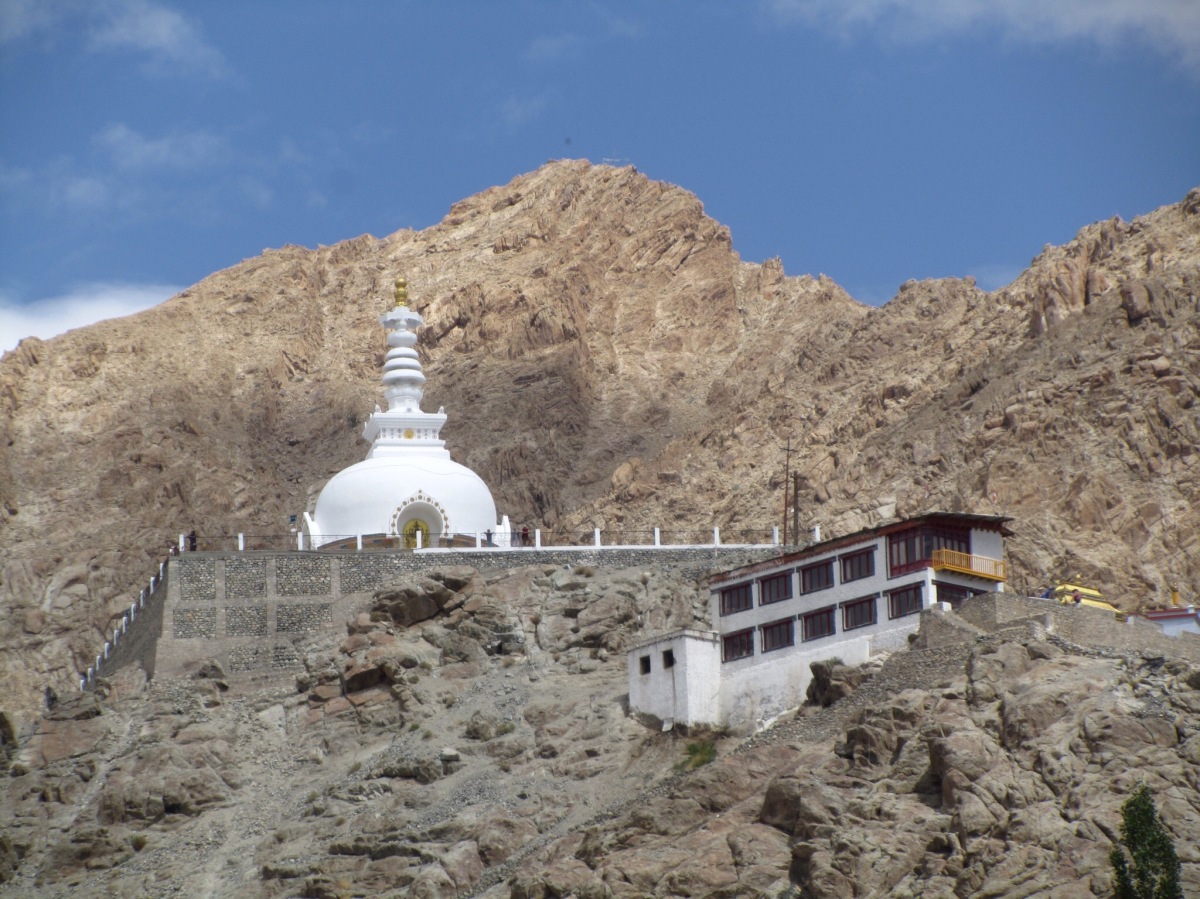 After an adventurous flight, I arrived intact in Delhi.

The last time I went to India, I had lunch with some friends at an Indian restaurant, and became suddenly ill at the end of the meal. Emerging from the bathroom 45 minutes later, I told my friends, “I’ve got Delhi belly, and I’m not even in India yet!” Yet the event seemed to cast a protective spell over the trip in terms of gastrointestinal fortune. While on the flight, I had a similar but shorter episode. I’m hoping it’s my good luck charm. In Ajahn Sucitto’s book “Rude Awakenings”, he refers to having such episodes as meeting the goddess Kali, who gets her say about visiting India. So Kali and I have definitely had a meeting, and I imagine we’ll be chums by the end of this trip.

I met my friends in Delhi, and we flew to Leh the next morning. It took two approaches to land within the lunar landscape. Tall, stark mountains surrounded us with snow covered peaks in the distance. The valley, an oasis of grass and green trees, provided a striking contrast. We were escorted to a lovely hotel (part of a package tour that my friend arranged) and advised to take rest to adjust to the breathless altitude of 10,000 feet. I could definitely feel it while climbing the stairs.


The local greeting is “Julley” (pronounced Joo-lay), which serves for hello, goodbye, please, and thank you. All of the Ladakhi people seem very friendly, and are easy to speak with. Most seem to speak Ladakhi, Hindi, and English, so it’s easy to find common understanding.

In the evening we went to the marketplace in town to look around.

While the shops had a variety of beautiful things, I wasn’t ready to shop yet. I find the Indian shopping experience to be a bit intimidating. I don’t haggle well, and I’m not a fan of being swarmed by salesmen. I get used to it in a week or so, but I’m not there yet. What I did find though, was a Tibetan vihara with a temple. I ducked inside and enjoyed the peaceful atmosphere that was better than any shopping experience.

The next day we headed northwest along National Highway 1. We stopped at Gurudwara Pathar Sahib, a Sikh temple that has a boulder with the imprint of one of their teachers. When one visits a Sikh temple, one covers one’s head and removes one’s shoes, stepping through a shallow area of water to clean ones feet. Sikh devotional songs were playing, and tea was served to visitors. I’m hoping to visit the main Sikh temple in Amritsar in a few weeks, so this was an enjoyable preview.


The roads are smoothly paved, yet have no shortage of overhanging (and sometimes falling) rocks and hairpin turns. Our driver negotiated it all with great skill, so that we could enjoy the scenery of lunar mountains and ribbons of green along the Indus River.

We continued on to Lamayuru monastery. Lamayuru monastery dates from a cave that was used by the Tibetan teacher naropa in the late 11th century. I’m not sure exactly when the buildings were constructed, but they blend into the landscape well. Tall, shallow buildings with flat roofs and ornate window frames, and whitewash walls that blend in with the rocky slopes they’re built upon. There were also caves, which looked like great places to meditate. Sadly, no accesss.


Today we returned from Ule and visited the Alchi and Thiksey monasteries. Thiksey resembles the Potala palace in Tibet, and both places are awash in intricate carvings, colorful wall paintings and low doorways. The view from Thicksey’s roof was incredible, and definitely worth climbing the stairs for. 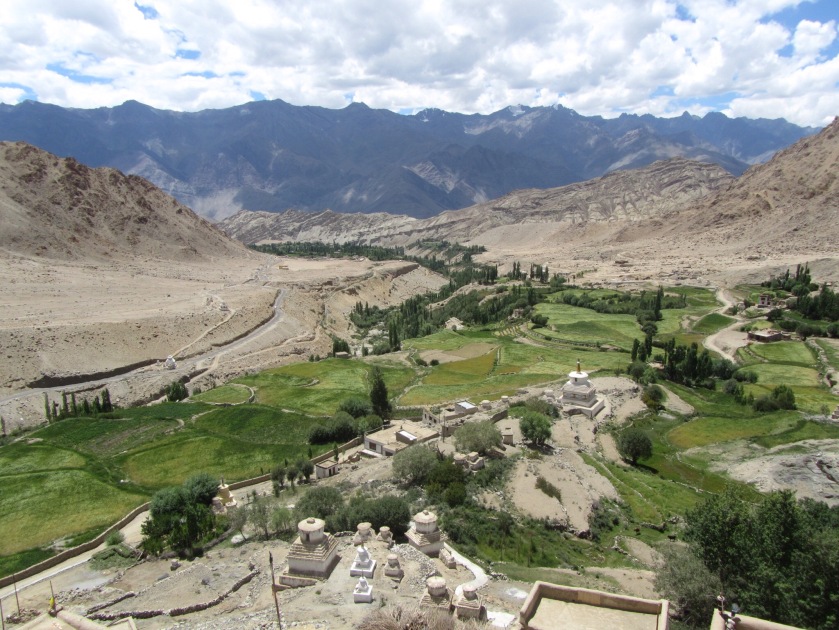 It was quite tough to whittle through all the pictures I’ve taken in the last few days, and even tougher to upload them. Internet moves at a glacial pace here, so I’m afraid my visions of sharing lots of pictures on the road may not be a reality. I’ll end with a few more and try to add some later. 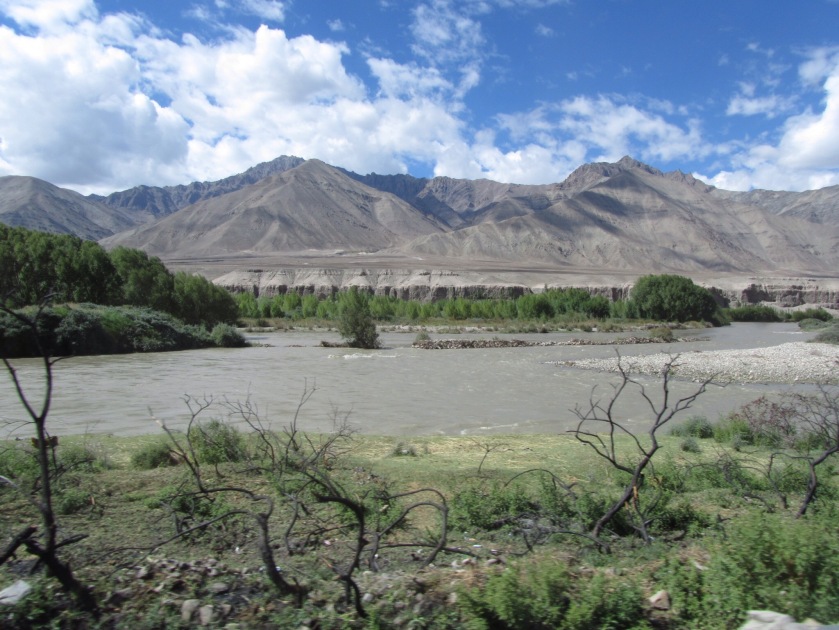 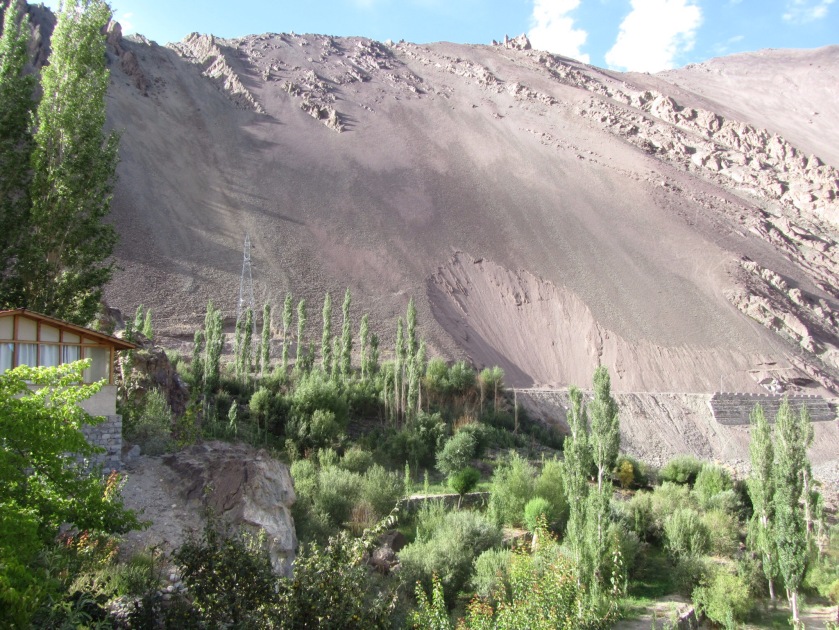