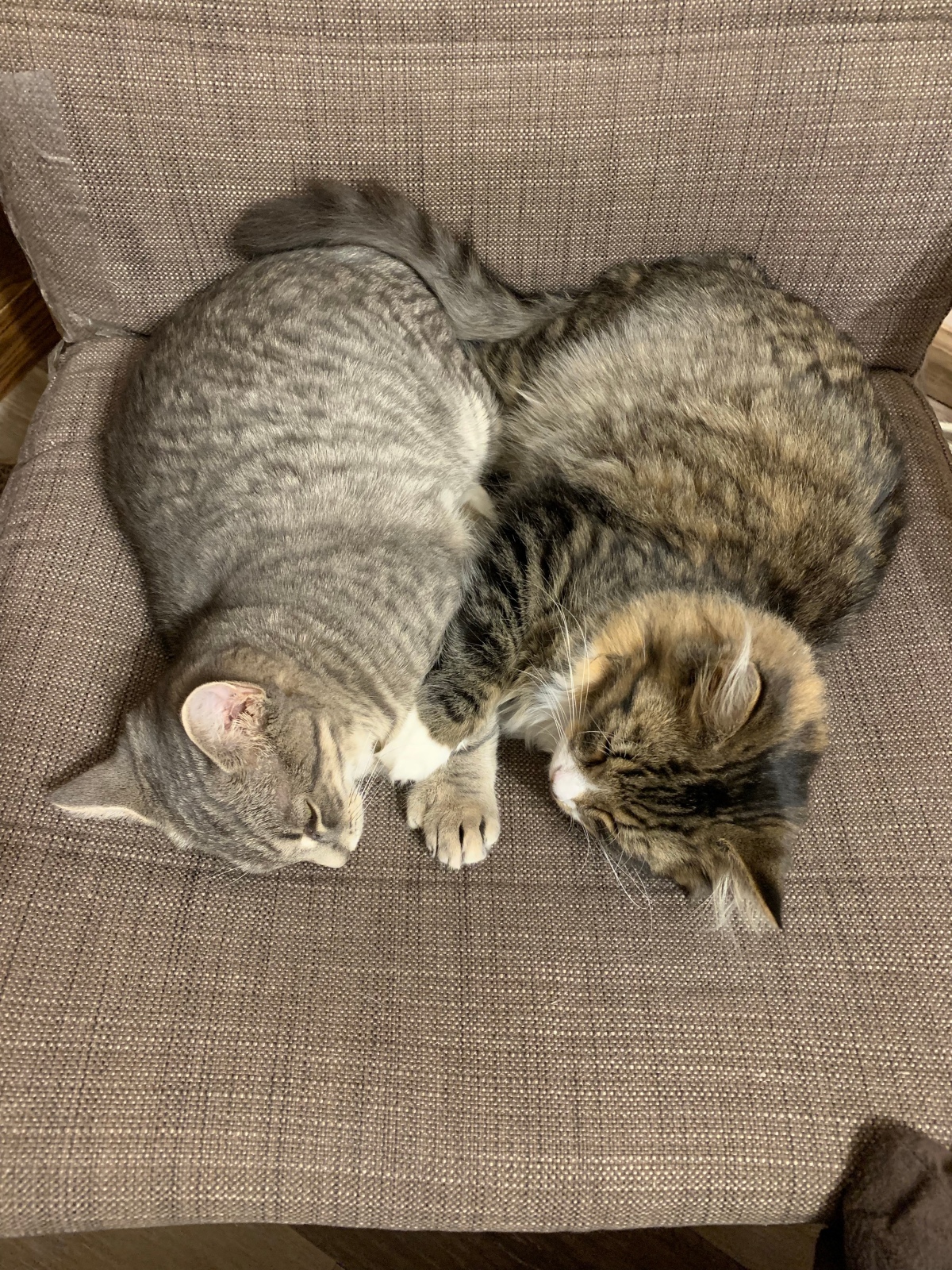 “Watch out when you get in your car; there’s a kitten under it” said my stepfather back in July. He’s 87 and his eyesight isn’t the greatest, so I was a bit skeptical.

“Are you sure it wasn’t a groundhog?”

“No, it was definitely a cat of some sort”.

So of course I had to go out and look.

In fact, there were two kittens, who appeared to be quite scrawny and motherless. I estimated they were about eight weeks old. I waited around and kept checking, but never saw the mother. They looked so tiny. And so HUNGRY.

I’ve always favored dogs, and have had several thus far. I liked other people’s cats, but never was keen on having my own. Besides, I’m allergic to them (I’m allergic to dogs too, but…). I’d been really missing having a dog around, but with elderly folks unstable on their feet and prone to hospital visits, etc., having a dog wasn’t really feasible.

So these two kittens appeared, and what did I do? I fed them, of course. I went out and found kitten food and little tiny bowls, and started feeding them several times a day. They remained outside, and I would come out and play with them. I went all in and even bought cat toys.

Then Mama showed up three days later, and came right up to me and rubbed her face all over my hand and legs. It’s as if she was thanking me for feeding her kittens. So I found adult cat food and started feeding her too. Of course.

I asked around the neighborhood to see if anyone was missing a cat. Nope. I checked lost and found sites, the humane society, everyone I could think of. I also checked to see if the local shelters were taking cats and kittens. Nope. Nobody had lost a cat, and nobody wanted any either. You couldn’t give them away. My guess is someone dumped them.

So what to do? Not feeding them seemed cruel. It’s possible they would have survived on their own, I guess, but I wasn’t prepared for the possibility that they would starve to death. So I continued to feed them.

They started as strictly outside cats, then indoors at night, then they became indoor full time. The longer they’ve been here and the more I invested in spaying and neutering, the more I felt I wanted to protect them. Indoor cats live 10-15 years on average. Outdoor cats only about 2-5. While we live in a rural area, it can still be dangerous. There are coyotes and other predators out there, not to mention cars that zoom along our road at high speed.

And so that’s how I’ve ended up with three cats.

Mooji is a sweet little female, with “thumbs” on her front paws. It’s called polydactyly, and while not truly rare, it’s relatively uncommon. Apparently Hemmingway favored and had many polydactyl cats. “Mooji” is the Chinese word for thumbs. She is my morning alarm clock and comes up to me purring and kneading early in the morning. She also loves to snuggle in my lap in the afternoon. While she was the first to approach me and let herself be petted, these days she’s more shy, until it’s snuggle time on her terms.

Mowgli is the male kitten, who was more wild and standoffish at first. His fur is a bit longer, and he has more of a wild look. Initially I could only pet him while he was eating, but then after a five day trip, I returned to a cat that would come up to me and seek affection. Now he’s quite affectionate, and loves to come up and pounce on my lap, and then walk back and forth purring and rubbing until he flops down. He is quite the climber and daredevil, much like human teenage boys are.

Mama Bear is mellow and as attention seeking as a dog, although she’s usually not one to sit on your lap. She tends to favor Mowgli, and still plays with him as if she’s still a kitten. She nearly is, as she’s only about a year old. A teenage mother, so to speak. She remains appreciative and loyal, and loves to watch for birds out the window.

So I’ve been having fun playing with the cats. They’ve gone from being barely over a pound to 6-7 pounds in the last four months, and their personalities are becoming more obvious day by day. While I certainly wasn’t looking for any pets, they arrived at just the right time, and have graciously agreed to allow me to be their human minion. I don’t know how having them will work with travel plans, but I’ll figure it out eventually.

Be well and peaceful, dear readers. And even if you’re not into cats, may you know the warmth and joy that comes from having one (or more) on your lap.

16 thoughts on “Smitten With Kittens”