﻿Jodhpur is classically known as the blue city. Originally, blue was a distinguishing color of only Brahmin houses. Later, everyone else got into the act, and now a majority of houses in the city are painted varying shades of blue. IMHO, much prettier than pink, but to each their own. The blue color is also claimed to repel insects, but I have my doubts on that. 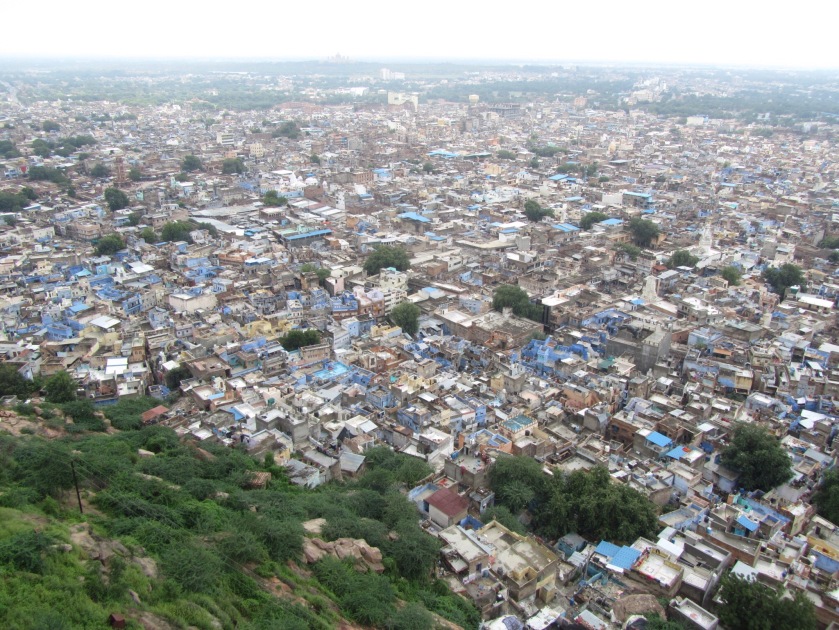 The first day there I headed to Mehrangarh fort. Nothing “meh” about it; like Amber fort it was everything I could have asked for in Rajput architecture. Construction of this massive fort was started in 1459 by Rao Jodha, and continued with successive rulers. The fort encloses gardens, massive gates, meeting halls, and private chambers. There’s a museum of elephant seats, palanquins, paintings and other items used and admired throughout the ages. I walked around for a few hours, and then fueled by a makhania lassi and pyaz kachori, wandered further to the Rao Jodha desert rock park.

In case you’re wondering, a lassi is a drink made from yogurt, combined with either spices, fruit, or honey. A makhania lassi is quite thick, sweetened, and made with saffron. The best ones in possibly all of India are served at Shri Mishrilal Hotel. They’re so thick they’re eaten with a spoon instead of sipped. Kachori are fried bread with various fillings. The pyaz kachori seemed to have potato and onion inside. Probably not very healthy, but tasty nonetheless.

Rao Jodha rock park is 73 hectares large, and located at the base of the fort, providing some great views and photos. It was also a beautiful retreat from the crowds. At first I wondered why there seemed to be no one else there, but it soon became apparent as the temperatures rose. Most people go there in the morning, but I was there from 12-2. But there was a breeze, and I had water, so it didn’t get bad until towards the end. Maybe I’m getting used to the heat here. Maybe.

The next day I set out with a short list of errands: get train ticket to Jaisalmer, get batteries for water purifier, get some medicine and a cheap prepaid cell phone. I of course ended up walking way past the train station, and thankfully went with a rickshaw after I felt like I should have been there (boy was I off course!). For some inexplicable reason, the rail  booking office is 300 meters away from the actual station. Don’t ask me why. But knowing this, I made my way there after being dropped off at the station itself. I patiently waited in queue and handed in my filled request form.

Tourist ticket ok. You have photocopy of passport? No? We don’t make copies here. Come back with a copy. Next in line please.

So I wandered towards the post office next door, when a man helped me find a nearby shop to get a copy. Returning to the ticket office triumphantly with ticket in hand, I got my ticket. Ha.

The same guy also “helped” me get a cell phone, but pressured me into getting one withoutq a receipt (yeah, I know, you see where this is going, dont you?). He then “helped” me get a SIM card, but they wanted a photo for it. I didn’t have one, other than the picture on my passport. Feeling conned and frustrated at this point, I left, and headed to the main market for batteries and a pharmacy, but was unable to find either. No one had the batteries, and a pharmacy seemed nowhere to be found. I retreated back to the guest house and sulked through the afternoon, then thanks to google, at least found the pharmacy later that day (it helped that it was near the lassi shop).


The next day I went on a village tour, seeing a pottery maker, a block print maker, a loom weaver and Bishnoi tribal members. The Bishnoi, named for the 29 precepts they keep, are the original tree huggers. In 1730, in their efforts to protect local khejri trees, over 370 members hugged the trees to save them, and were beheaded in their efforts.
So in the grand scheme of things, the fact that when I returned to the phone store after the tour and they wouldn’t take the phone back seems relatively minor in comparison to being beheaded. And yes, rather foreseeable. A $20 lesson to follow my instincts. It could have been much worse. Anyone want to buy a phone?

Minor as they are in the grand scheme, incidences like this make me want to just stay in my room and not go out, yet there is so much goodness out there that I miss by hiding. So the mind goes back and forth. I hide for a while, and then I give India another go. And I usually get rewarded for doing so.

I step over a sea of bodies sleeping on the station floor and make my way to platform three over the stairs. The smell of machinery and human waste assaults my nostrils. More people are sitting, sleeping, or squatting on the ground, waiting for the train that’s thirty minutes late. Vendors walk up and down the platform with paper cups and teapots, chanting their popular mantra; “Chai, chai, garam chai, chai-chai-chai”.

This time I find a sign which shows where my train car will be on the platform. I have not always been so lucky, and have ended up race-walking/jogging from one end of the platform to another. India has very long trains.

The train arrives and I climb the steep steps aboard, already happy that I bought a ticket in the air conditioned section. I’m wearing my suitcase on my back, my backpack on the front, and a yoga mat bag slung over my shoulder. I look like a deformed turtle. I step aside to let some departing Sikh gentlemen go by, and they help me to find my seat without even being asked before they go. The goodness in India strikes again.

I watch the landscape roll by and am reminded of Arizona. The English planted a variety of Mexican trees here similar to mesquite, to provide a fast growing tree as wood supply. As foreign species often do, the trees adopted to their new environment a little too well, and are now an invasive species, choking out the native plants. The green of the mesquite-like trees and grass complement the sandstone rocks among the occasional hills, then the grass and the trees became more sparse. Thus was the moving picture I watched on my way to Jaisalmer, which will be my next post.