I said goodbye to my friends in Delhi, and took a taxi to the bus station. The taxi driver had been asked to help me find a bus to Rishikesh, but little did we know that there’s a system in place: one usually takes an AC bus to Haridwar, then catches another bus to Rishikesh, an hour away. Unarmed with such info, I ended up on an old, non-air conditioned, crowded public bus for the seven hour ride to Rishikesh. Well, I did want the experience of India.

The bus idled at the station until the driver felt there were enough people to make it worth his time. We pulled out and crawled eastward out of Delhi traffic at an inchworm’s pace until we reached Ghaziabad. After squeezing through, traffic opened up a little bit, and more greenery appeared by the side of the road, increasing as we headed north until we got to Haridwar.

Here are some of the things one sees on a north Indian road trip:

Punjabi dhabas: the original McDonald’s, Indian style, at which one can expect to find tea, biscuits (cookies or crackers), bottled water, and all manner of Indian snacks and fried food. There are probably millions of dhabas in existence.

Houses in varying states, ranging from palatial to merely consisting of a tarp stretched over poles, all mixed higglety-pigglety with stores.

Trash thrown about. There are no collection bins to speak of, yet there is a system, as the loose garbage provides food for the wandering animals, and a livelihood for those who go through it for recycling, cloth, metal, etc.. Garbage processing happens in India , it just isn’t hidden away like it is in the west.

Oh, and of course, the thousands of buses, lorries, cars, rickshaws, motorcycles, bicycles and pedestrians all with somewhere to go.

So add plenty of dust, the smell of burning things, open toilets and who knows what else, and plenty of honking, and you have the basic North Indian driving experience.

Having done that on a crowded, vibrating bus for seven hours, I disembarked in Rishikesh with my luggage, 85*F temperatures, and 95% humidity. I soon felt like a used washcloth, and after walking for about a half hour, waved the white flag and hired a rickshaw. Since I never would have found the hotel I was looking for, and it was up on a hill, I’m glad I did. It was definitely worth the $1.20 I paid.

The town of Rishikesh itself is a bit run down, dirty and crowded. The nearby Lakshman Jhula area just north of Rishikesh, is nestled between the banks of the Ganges and forested hills. It holds most of the ashrams and is slightly more appealing, but still has a little bit of a seedy aspect to it. I tried a hotel on the first night, and the Shri Sant Seva ashram the next. My rooms at both places were pretty sparse and the bathrooms were a bit dingy. But my room at the ashram is right next to the river, and if I jumped over my balcony railing, I could go swimming (I wont). I was looking at how to move on at first, but after spending the first day recuperating from running around in the heat with luggage, I feel much better and think I’ll stay for a while. 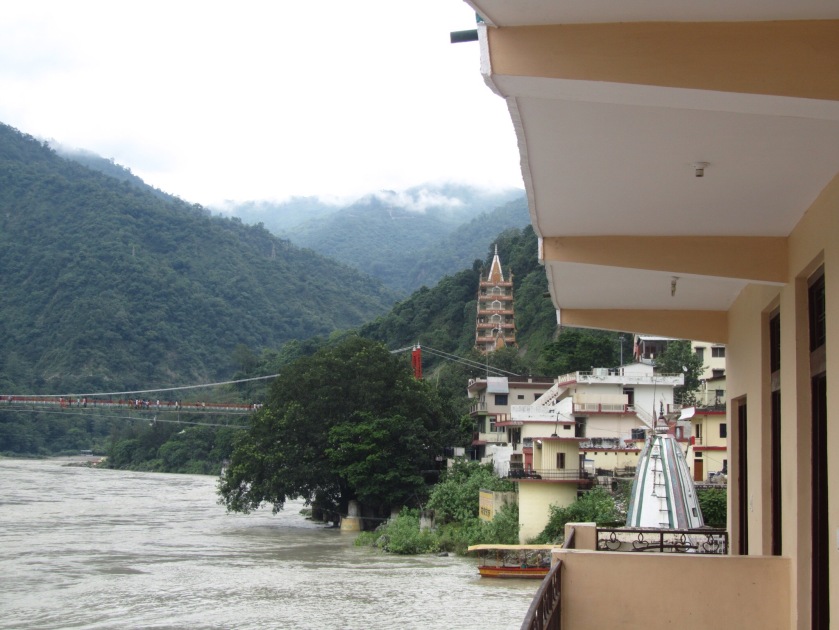 7 thoughts on “Ah, that’s the India I remember”